Nearly two years ago, I began to pay attention to my weight. The scale (and my doctors) told me I was definitely overweight and my BMI told me I was bordering on obese. On Christmas Day 2011, I started a food journal. I recorded everything I ate and did my best to estimate the calories. It worked. Over the course of about 9 months, I lost 45 pounds — reaching my target weight. Happily, I’ve kept them off.

Since that time, people have often asked me if I felt different. In all honesty, most days I don’t notice. However, this week, I’ve noticed.

There have been multiple times over the last couple of days as we’ve trekked through Lisbon and Madrid when I’ve realized I would not have been able enjoy this as much if I was still carrying those 45 pounds.

There are some simple and basic things that have made me take notice of the advantage of being smaller, notably many European water closets are quite tiny. This trip I’ve realized exactly why they are called water closets, since I’ve been in many that clearly used to be closets! They are a tight squeeze the size I am now, it would have been downright uncomfortable to manage before.

And, don’t get me started on the shower stall in our train cabin! I remarked to Jeff this morning that our cabin would have been impossible to maneuver and truly miserable if we hadn’t both lost the weight we had.

But most notably, my ankle has not locked up.

My right ankle was reconstructed when I was 16 and I have fairly severe arthritis. Two years ago, had I been walking even half as much as we’ve walked the last three days, I would have required a day of down time to recuperate and I would have been searching for the nearest soaking tub in the hopes hot water would loosen it up.

No doubt, my legs are sore, tired and I desperately need to do some yoga hip openers, but my ankle has held up remarkably well.

I’m grateful to be at a healthy weight and able to squeeze in as much exploration as possible.

To say the scenery was beautiful would be an understatement. When a day includes both sweeping views of the Pacific and secluded redwood groves, it’s easy to be grateful to live here in the Bay Area.

The only downside of the day was when I misstepped and twisted my ankle. That wouldn’t have been so bad if I didn’t have another mile and a half to go. Despite my whining, I survived and by the next day, my ankle was doing fine. 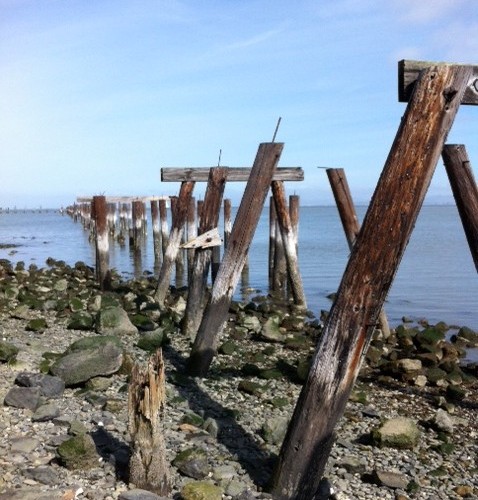 Today Jeff, Ethan, Jane and I completed our first hike from the 2012 East Bay Regional Parks Trails Challenge. We went out to Point Pinole Regional Shoreline. We followed the Bay View Trail, then went down onto the beach and followed the shoreline all the way out to the point. Coming back we came back through the Woods Trail and spotted a number of bunkers, as well a few Monarch butterflies that are known to hang out in the woods during this time of the year.

I never would have imagined such a great park tucked between Richmond and Pinole. The park was expansive and absent of crowds. My only complaint: The park is not far from the Richmond Rod & Gun Club and we spent much of the time listening to the sound of gunshots echoing. That made it a little hard to just relax and enjoy the beauty around us. I’d recommend checking out the shooting schedule before planning a trip.

Yesterday was lovely. Met my sister, Tracy, for lunch and then we walked the lakeside trail at the Lafayette Reservoir. The weather was beautiful, though both of us lamented the fact that it’s Winter and there has not seemed to be Winter weather. I suspect that come Spring, when we’ll be expecting the Spring-like weather, the Winter weather is going hit. After our walk, we went to visit our parents. All-in-all, a really nice and relaxing day.

Today, we went looking for Claremont Canyon Regional Preserve. After reading about it, I was intrigued to learn of a regional park behind the Claremont Hotel. We followed the road up the hill and I was so distracted by discovering the environment above the hotel, I completely missed the turnoff to get to the park.

We kept driving up hill on Claremont and made it up to Grizzly Peak before we confirmed we’d messed up. Coming back down the hill, we spotted turnout and the entrance to a firetrail and decided to park and start climbing. Once we were done and found a map, we discovered we were hiking on University of California land, rather than East Bay Regional Parks land, and we ended up on the Panoramic Ridge.

We didn’t have too much time to explore, but we found some sweeping views of Oakland and spotted a number of trails worth exploring. On the way back down the hill, we did actually find the turn-off to Claremont Canyon. At some point, we’ll go back to where we intended to begin and see if we can make our way up to where we ended up. 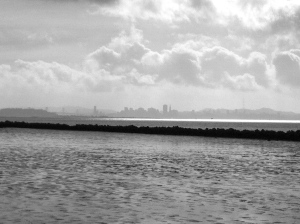 On Saturday, during the break in our weekend storm, Ethan and I went out to Point Isabel in Richmond. Given all the rain on Friday night, I went looking for some place with a paved trail and Point Isabel seemed like a nice choice. Since the park sits right on the Bay, there was quite a breeze and my ears were cold. The park is a well known local dog park, so I was treated to a full hour of Ethan sharing why we should get a dog and what kind of dog we should get (yes, tactical error on my part).

Running parallel to one of the trails is part of the San Francisco Bay Trail – so much more to explore. 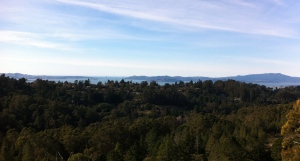 As part of my New Year’s Resolution, I’ve set a personal health goal of completing one new hike each week. My hope is that the hikes will not only infuse much lacking physical activity into my life, but also remind me how lucky I am to live in such a great part of the world (or at least appreciate wherever I am traveling in a given week!).

To keep me honest, I plan to share my walks here. Today, Ethan, Jeff and I went up to Tilden Park (a 15 minute drive from my house)  and walked the Quarry and Big Springs Trails.